Home / Editorial / Barbershops Have Evolved But Did Customer Service Fade?

Barbershops Have Evolved But Did Customer Service Fade? 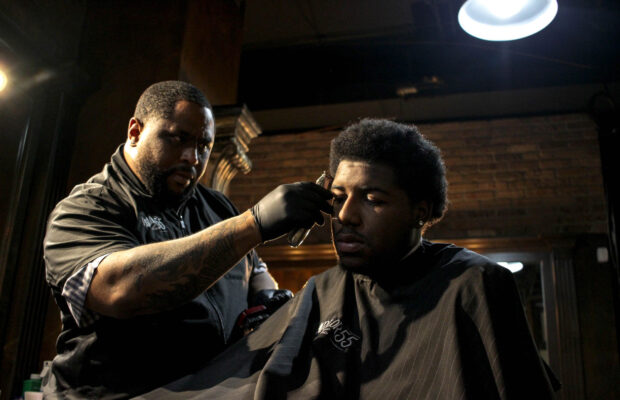 Bring back $700 rent!  Bring back $5 dollars making a difference in your gas tank!  More importantly, bring back $10 dollar haircuts!

We know none of that is going to happen.  Especially the $10 haircuts.  Gone are the days when going to the barbershop was affordable.  Nowadays, going to the barbershop is equivalent to a utility bill.  Over the last few years, we’ve seen an interesting spike in the price of a man’s haircut.  Not saying the rise in prices aren’t warranted, but are they?  We know that everything costs more and an inflation in society has occurred, but has there been a serious increase in barber supplies outside of everyday tool use?  Has the price of sanek neck stripes, oil sheen, brushes, combs, and clipper guards risen that much?

The average haircut these days go for $25.  Factor in a good barber, geographic location, popularity, skill set, and we end up with the real cause of inflation, which isn’t the supplies, but supply and demand.  Once supply and demand are accounted for the price then increases to $30, $35, $40, and maxing out at $60, if you’re lucky.  Supply and demand have allowed barbers to charge the prices they do. It’s not always about being a good barber.  It’s very much about the demand for the chosen barber.  The pay isn’t solely based on time and talent.  Many barbers are capitalizing on the high demand of a reliable barber.  It’s the good barber verse the bad barber.  The reliable verse the unreliable.  Skill set verse popularity.  Plain and simple, some barbers are only barbering by default.

A starting place to justify the pricing would be the barber’s ability to differentiate a haircut from a shape-up, from a taper.  Being able to properly describe the difference in those services can support the barber’s asking price.  Too many barbers have lumped them all together and leave the customers feeling that regardless of their requested service they’re paying one price, which eventually ends up being the highest price.  How are all three services titled differently, require different time lengths, but priced the same?  I know barbers who say, “if I’m touching your hair for any service, it’s a haircut, so haircut price.  Tapers and shape- ups are just terms to describe the kind of cut you want.”  Also, distinguish if the client is a walk-in, or if having a scheduled appointment makes a difference?  What of a difference do the two make in relation to price?

Barbers must also ask themselves: how has the/my service changed?  Am I providing a service that supports my pricing?  We see it all the time.  The service is advertised with a blanket of things/add-ons that are tied to the service, but never practiced.  Are the add-ons turned down by the client or not offered? You can’t promote that your haircuts come with a wash and never perform the service.  That’s false advertisement at its best.

It’s imperative to be aware and mindful about the environment you create.  Barbering has grown into a phenomenon no one could have imagined, which justifies the massive increase in cost.  Barbers have adapted the spa-esque services.  They’re providing hair washing, massages, hot towel shaves, waxing, and many other services you find in a spa.  They’ve ventured into the luxury style of service.  However, most barbershops haven’t adapted to the spa atmosphere.  How is one to enjoy a hot towel lather or massage with barbershop parlance and the music or television operating at ignorant levels of sound?

A hair care professional is one of the oldest professions.  Traditionally, men would groom themselves or take turns grooming each other.  Many men still practice self-grooming and deem barbershop visits as a luxury rather than a necessity.  In the early days of barbering, visits to barbershops became a symbol of status.  It was a pastime for some and a participating act by the wealthy.  Barbershops became parallel to beauty parlors.  Barbershops use to be a pillar in the communities.  The most important thing to a brotha is a barber, and that will always remain, but these barbershops today aren’t the barbershops they once were.  Barbers today want to be a celebrity.  The fore fathering barbers were men of their community and were treated like celebrities from their clients and community.  New school barbers are too busy putting on airs and creating this false persona of popular and busy.  They no longer earn their way.  Social media has granted them that privilege, but it’s also affected their communication and business skills.  Barbering is entrepreneurial, a business, and should be treated as such.

Barbers of today have been granted the tool of technology, which has become a lifesaver for far too many.  Barbers have apps that allow clients to schedule an appointment without ever having to have an exchange with their barber.  It can even act as a semi-vetting process with its partial payment request feature.  No better way to weed out the real from the fake than requesting a deposit prior to service.  However, that feature should be applied to the client who is inconsistent, inconsiderate, and abusive of time.  Technology has helped the barbering business tremendously but has also affected some barber’s ability to connect with the client.  Lack of communication has caused a disconnect between the barber and the client, which is why barbers must go the extra mile in customer service.

There’s always going to be that argument about the non-license barbers ruining it for the licensed barber, and how it caused the profession to fail and not be treated as a respectable profession.  License verse non-license has minimal barring.  The truth is, barbering is being treated like a hustle by far too many than a profession.  The barbering industry is rising and dying simultaneously.  It has managed to turn itself into a luxury profession, which not only supports the interesting increase in price- but also justifies it.  Essentially, barbers just want to earn more, and why shouldn’t they?  Ultimately, barbers are adding to your appearance and confidence, which is what you want.  To look good and feel good.  But then it comes back to: is this cost a reflection of the time or talent?  People truly don’t mind paying for what they want.  They just want to feel good about doing so.  Every customer has options, and every barber has the option to charge whatever they want.  So, we pay barbers their requested price.  But the wise barber understands the importance of making the experience match the expense.

I can be your cup of tea or shot of Hennessy!
Related ItemsBarberingBarbersBarbershopsFeatured
← Previous Story Is Insecure’s Final Season Lackluster or Just What You Need to Wrap Up A Series
Next Story → Hear Us Out: Is Method Man Moving Into Denzel Washington’s Territory?