Home / Editorial / The Rose that Grew from Concrete

The Rose that Grew from Concrete 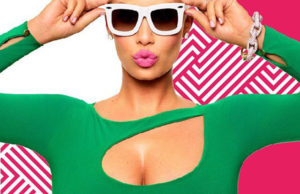 Whether she’s dragging someone for filth on Twitter with her infamous clapbacks, or teaching women across the world how to become bad bitches. The love and hate for Amber is as real as her breast. Haters proudly stand on frontlines and criticize her, as they privately emulate her. Regardless, Amber Rose has indeed schooled many on why blondes have more fun; when they chose to own their sexiness and boss the hell up.

The South Philly native emerged on the scene just a face with no name.  She was the stylish girl (no stylist, she dressed herself) with a baldhead and an exquisite collection of sunglasses. Soon enough her name was no longer a mystery, but her voice would later have us mystified.

Fast-forward to a highly publicized breakup from her rapper ex that brought ridicules and hate after the release of his album; that was later followed by an amiable, yet publicized divorce from her rapper husband and father of her child. But did that stop Rose? Hell no, she picked up her broken pieces and turned them into girl power gold. Proving she’s more than her famous exes by transforming her lemons into entrepreneurial lemonade, as the hate continued with an enormous amount of slut shamming from the public and her peers. She politely silenced the majority with Twitter clapbacks or in depth conversations stating her position and views. Sadly, she was still being labeled as an ex stripper who lucked up from dating famous rappers.   Amber had become a target for the cliché stripper shamming that follows after a girl takes her final dance. She found herself front and center as the poster child for women across the world that has been victimized and taunted by audiences who rather sling ungodly sexual slurs, than listen. After the many stances and statements she made with her clothing, Rose embarked on the ultimate feminist movement, her slut walk. Of course her passion project would ignite a fire that Rose yet again set out to extinguish. The Slut Walk movement was first invented in 2011 in Toronto with walking protesters who united against the rape culture and slut shamming. Amber’s walk geared to empower women, while educating them. Its agenda is to shatter all double standards and gender stereotypes. Rose told MTV News “I deal with a lot of equality issues in my own life, and I wanted to make a difference any way I can. So basically me and my team put our blood, sweat, and tears into developing our own Slut Walk to bring awareness to what’s going on.”  Rose’s Slut Walk that took place on Oct. 3rd 2015 in Downtown L.A. was a success and is gearing up for it’s second annual walk this fall.

The same month as her Slut Walk, Muva (her deemed nickname) dropped another gem on the world, giving her haters another reason to hate her. She released her book “How to Be a Bad Bitch,” that found itself on many “must-read” list. The 256 page literary project is Amber’s guide to love, life, and success. At that moment Rose solidified herself as a pop-culture phenomenon. While Amber continues to use her voice and platform for woman’s rights, the hate will continue. Even more so now that she’s landed a late night talk show with VH1. Yes, the sex activist has plunged her call of duty to late night television. The unapologetic provocateur ensures us all that sex will be a huge part of the topics discussed on her talk show. And even more recent, we’ll get to see how Amber’s sexy pole dancing moves will translate on the ballroom dance floor now that she’s become a contestant on this season of the hit show “Dancing with the Stars.” This loved and hated Bad Bitch isn’t planning on slowing down anytime soon, and many should thank her for opening doors they never thought they could walk through. Her relentless feminist fight has just begun, but the strength in her rosebud seed shows that this rose has no other choice but to grew from the concrete.

I can be your cup of tea or shot of Hennessy!
Related ItemsAmber RoseDancing with the StarsFeaturedHow to Become A Bad BitchSlut WalkVH1Wiz Khalifa
← Previous Story Wendy Williams Caught the Heat
Next Story → The Bazaar Love & Hate for KimYe’