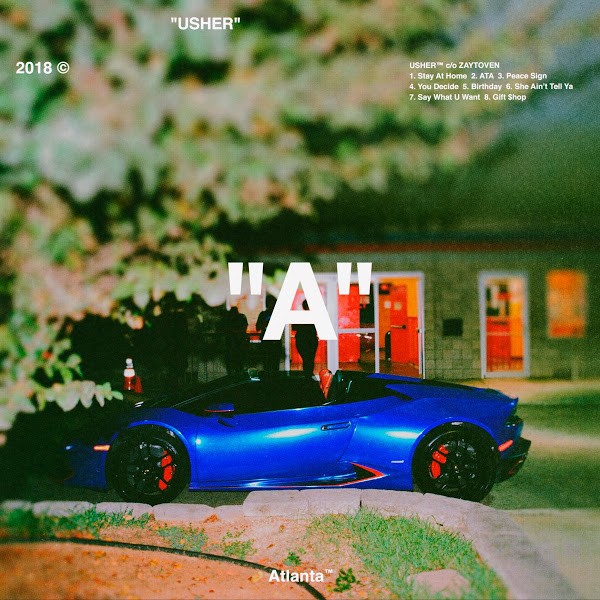 On the cusp of his 40th birthday, Usher gets extra cozy with his hometown sound on “A”. Teaming up with Atlanta producer Zaytoven to record an 8-song project in 5 days.  Followed with the decision to release it 48 hours before its date.

Instantly you hear that Usher still refuses to give his fans traditional R&B that they’ve been begging for since Confessions.  Raymond has been exploring sounds for the past decade and a half.  He invented the genre Crunk&B and lent a hand in popularizing Revolutionary Pop.  So, it was only a matter of time before he’d make his rounds to singing over trap beats.  After many attempts at exploring sounds, he finally got it right with his previous album Hard II Love.  Too bad by then his fans had already jumped ship.

On “A” Usher seems to be telling the story of yet another failed marriage.  Which he warned us was coming on H2L.  Nevertheless, he’s still making Usher music, just with an updated twist.  “Peace Sign” is the supreme standout of all 8 tracks.  Mainly because it has all the Usher elements to it.  A blend between mid and slow tempo, with sexual lyrics that ooze of current parlance.  Those same signature elements apply to “She Ain’t Tell Ya” where he sings about a litany of things he’s done for his woman that’s gone unnoticed, unknown and forgotten.  The genius of the track is his boss move of sampling his own hit song “Lovers and Friends.”  He also was able to create a new “Birthday” anthem for today’s generation.  “You can have your way for your birthday/ I’ll eat the cake for your birthday/ Beat it up for your birthday/ F&*K it up for your birthday.”  In the midst, he still found time to beg for forgiveness on “You Decide,” ultimately leaving the final say up to her.  Then ending the tale by pleading his case on “Say What U Want.” 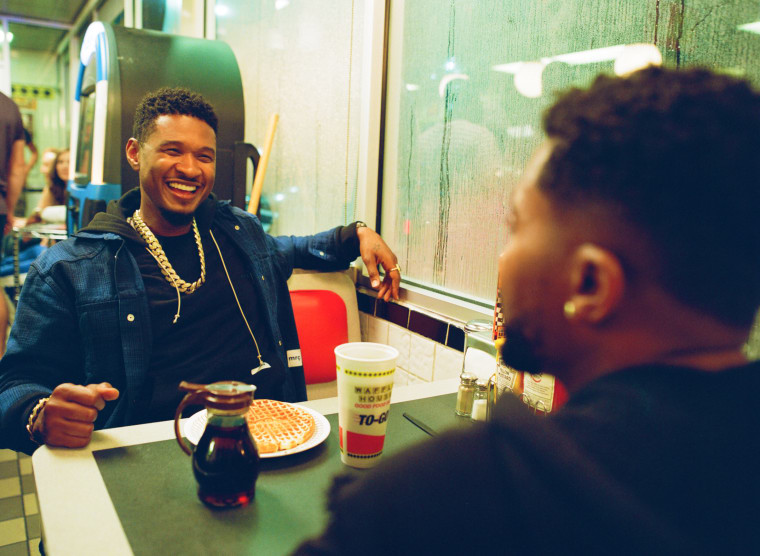 Most will argue that A’s material is immature for a 40-year-old man, and Usher is chasing today’s sound. However, if you listen closely you’ll hear that Usher has found a way to adapt to the current climate of music.  Sure, Usher may have abandoned his audience in search of a new fan base, but the gamble is: if the younger audience he’s wanting to please is listening to new Usher music?  Regardless he’s remained resilient with tapping into new sounds. Mild success has been garnered while exploring new musical spaces.  However, one thing that hasn’t changed is his ability to make a cohesive album.

As the new generation says: “A” is a vibe and has no skips. But outside of the 8 songs, a few will leave you with an underwhelming feeling, accompanied by annoyance from Zaytoven’s drops all over the album.  The project is a momentarily soundtrack that’s perfect for his 9th studio album. The 8 songs is Usher’s way of telling us that he’s not ready to join his musical peers on a “R&B Throwback Tour” just yet.  Usher’s marriage may have failed, but somewhere in there Zaytoven was able to brilliantly assisted Usher in regrouping for his homecoming to the “A.”

I can be your cup of tea or shot of Hennessy!
Related Items"A"AtlantaFeaturedUsherZaytoven
← Previous Story Kanye West ‘ye’ Album Review
Next Story → Solange ‘When I Get Home’ Album Review