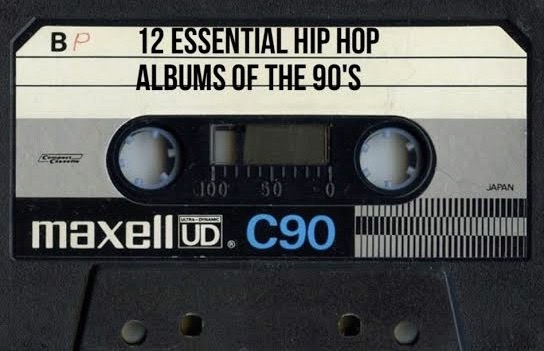 Hip Hop has become a phenomenon that has taken over the world. Alone it provides more jobs than any other profession in the world, and it happens to be one of the biggest influential things that continue to grow daily. Its four elements are made of deejaying, emceeing, break dancing, and graffiti art. The golden era of hip-hop provided diversity, while being innovate and experimental. The 90’s ushered in a new sound of hip-hop while some veterans rose like a phoenix and maintained their position within the genre, the era introduced us to legends. Here are twelve essential albums the 90’s gave us.

Puff Daddy & The Family: No Way Out– Before Sean Combs became the mogul he is now. The rapper, producer then known as Puff Daddy or Puffy, made his mark in the music world. In 1997 he gave us “No Way Out” which has unforgettable hit songs on, with countless features. The album also spawned the Grammy Award winning song “I’ll Be Missing You” that features his Bad Boy artists 112 & Faith Evans. The song was an ode to Evan’s husband and fellow Bad Boy artist Notorious BIG who was murdered earlier that year. We also received “All About the Benjamin’s” which has the iconic verse from Lil Kim. Other loved songs include “Can’t Nobody Hold Me Down,” “Been Around the World” & “Senorita.”

Fugees: The Score– The New Jersey trio returned with their epic sophomore LP ”The Score.” Their return will be greater than ever. It received commercial success immediately, by peaking at the number one spot on Billboard 200 chart, and later selling six million units. “The Score” offered a plethora of instrumentation, amusing rhymes, and soul. Their second single, the Roberta Flack remake of “Killing Me Softly” would catapult them into stardom. Too bad this ended up being their final album as well as their most successful.

Queen Latifah: Black Reign– In 1993 the female M.C. had found success in her newly hit sitcom “Living Single.” Before the show would go on to be the phenomenon it is, Latifah returned to her first love of music and released her third LP. “Black Reign” would become her most successful album with the singles “Black Hand Side,” “Just Another Day,” and her biggest hit, her powerful ladies anthem “U.N.I.T.Y.”

Notorious BIG: Ready to Die– The artist who would help Puffy launch his “Bad Boy” label was the Brooklyn newcomer “Biggie.” With a flow and storytelling technique that’s unmatchable to this day, BIG painted the perfect story of a young adult fed up with nothing to lose.   We also got to hear his struggle along with his flashy playboy personality. The story of “Ready to Die” is timeless and still prominent to this day.

MC Hammer: Please Hammer, Don’t Hurt ‘Em– Hammer’s third album would change hip-hop forever. His raps were friendly, fun, and positive. His single “U Can’t Touch This” would help the longevity of the album as well as the popularity of hip-hop. Songs such as “Pray,” “Have You Seen Her,” & “Help the Children” are responsible for “Please Hammer…” becoming the first hip-hop album to reach certified diamond status. The album has sold more than twenty-two million records and remains as one of the genres all time best-selling albums.

Nas: Illmatic– When a nineteen-year old rapper from Queens would release his debut, who knew that it’ll go down as one the greatest hip-hop albums of all time. Nas opened eyes to the New York streets with gritty and honest rhymes accompanied by sick beats. His storytelling powers have a unique spin, that you’ll need more than one listen to grasp the message. He’s a rapping prophet whose debut material on songs such as “One Love” and “Halftime” are still relevant today. He also predicted the order in which his children would be born on “The World Is Yours.”

Jay-Z: In My Lifetime, Vol. 1– although many give Jay’s first album “Reasonable Doubts” praise, it was his second album “In My Lifetime…” that plunged him into superstar status. I mean, he did have three installments of the album. From the witty wordplay on the intro, to “Lucky Me” and the bluesy but straightforward “You Must Love Me.” It will forever be some of his best work.

Notorious BIG: Life After Death– when art imitating life becomes real life! BIG’s “Ready to Die” follow up album “Life After Death” was released a two weeks after the rapper was murdered. The LP would essentially become his life after death. It was the golden era of double disc albums, and it stood the times keeping his fans attention as they mourned his death. A sophomore album that chronicled where his acclaimed “Ready to Die” left off, and that’s two discs full of timeless hits, can only make you wonder how great he could have been if he were still alive.

Lil Kim: Hard Core– BIG’s sexy pint-sized protégé kicked in the door with her hardcore delivery that spoke about sex, drugs and her high-end garments. Destined for fame the Queen Bee made her mark in the rap game and directed the way for female MC’s to be sexy. The album produced three singles, two that are platinum singles, “No Time” & “Not Tonight.” Nabbed a Grammy nomination and made Kim the first female rap artist to have three consecutive number-one singles on the chart.

DMX: It’s Dark and Hell Is Hot– The debut album was deemed a classic. With production from Swizz Beatz, and others the album posses a dark aggressive and violent sound. Making the sound of a dog that barks and groans popular, “It’s Dark and Hell Is Hot” provided us with great songs. “Ruff Ryders Anthem,” “Get At Me Dog,” along with the introspective tracks “Let Me Fly” and “Damien” where his persuasive alter ego makes a deal with the devil.

Dre. Dre: The Chronic– After Dre departed from his group N.W.A. he presented the world with “The Chronic.” The title is street slang for marijuana and the music is guaranteed to get you high. It generated three singles that included “Nuthin but a G Thang,” “Dre Day,” and “Let Me Ride.” The album is noted to be one of the most influential albums of the 90’s, founded the “G-funk” sound, while launching Snoop Dogg’s career. Aside from being one of the most well produced hip-hop albums of all time. The LP solidified Dr. Dre as a heavy contender in the hip-hop game.

2Pac- All Eyez on Me