3 Reasons to Watch Brandy’s Sitcom “Zoe Ever After” 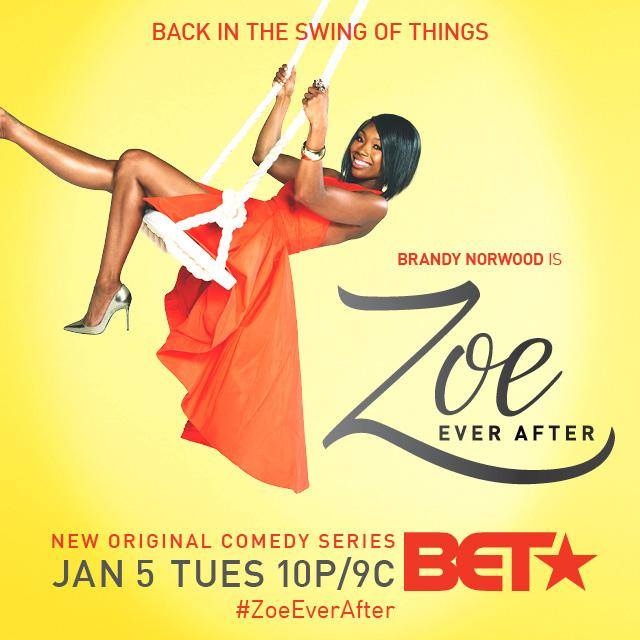 Grammy Award winning singer and actress Brandy Norwood makes a return to television in BET’s original romantic comedy “Zoe Ever After.” Norwood portrays the character Zoe Moon, a CEO of her very own cosmetic company, who’s escaping the shadows of her soon to be ex-husband; champion boxer Gemini Moon. Zoe is trying her best to balance her up and coming company, while juggling a dating life and co-parenting to their 8-year-old son Xavier. However, Zoe is not alone through her life’s trials. She has support of her best friend Pearl who handles her P.R. and her funny assistant Valente. If you’re hesitant about weather or not you’ll be tuning in, here are three reasons why you should:

Funny & Fashionable: Aside from her music, those who know Brandy are aware of her funny bone. The show provides us with the necessary laughter to accompany our lives. Its witty one-liners add a certain nuance to the script, giving more than just comic relief, and being that Zoe is running a cosmetic line in New York City it’s only right that she delivers a total package. Cosmetics fall in line with fashion so you can expect to see array of clothing items sported by Mrs. Moon throughout every episode. The pilot episode gave us a glimpse of a few fresh looks from Zoe.

The Relationship Regulars: Like most relationships that come to an end, they issue the process of moving on and getting back into the swing of things, as the show’s slogan implies. Zoe displays her inner strength by stepping out of Gemini’s spotlight and becoming her own. However, things for her are a little harder being she was married to a wealthy celebrity, who seems to always get what he wants and refuses to acknowledge the marriage is over. She dealt with his infidelities, and exited the marriage with a lavish loft to live in, and seed money for her company, which comes to bite her in the ass.

Moving on from Moesha: The “Moesha” comparison to Brandy’s teenage hit show will and can easily get thrown into the mix. So you can argue that Zoe is nothing more than Moesha all grown up, although, Zoe is the complete opposite of who Moesha was. However, it doesn’t hurt to think that Moesha could have become everything that Zoe is today, had we seen her grow up. So if you were a fan of “Moesha” it’s safe to say that Mo has become Zo.

It’s going to be nice to see where the writers will take this show. The cast is diverse and multi-cultural, as its subject matter is on trend by exploring the celebrity relationship within today’s world of tech savvy dating. That element is intriguing and perhaps will garner in many celebrity cameos, as India.Arie guest appears in the first episode. Along with that we’ll get to see Zoe become a female entrepreneur doing it all in today’s world.

I can be your cup of tea or shot of Hennessy!
Related ItemsBETBrandyZoe Ever After
← Previous Story 4 Ways to Jumpstart Your Fitness Journey
Next Story → Rihanna “ANTI” Album Review