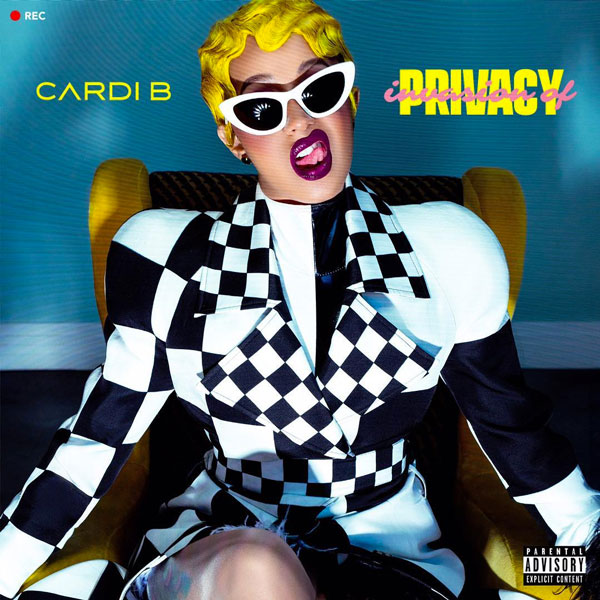 “I was covered in dollars, now I’m dripping in jewels…I started speaking my mind and tripled my views.  Real b!tch, only thing fake is the boobs.,” Cardi B. raps on her Meek Mill-esque track “Get Up 10.” And that was just the first track of 13.  She may have started things off speaking about her humble beginnings, but Cardi wasn’t reluctant from discussing what’s come with her rise to fame.

With lyrics such as, “you even got me tripping, you got me looking in the mirror different, thinking I’m flawed because you inconsistent.” Cardi reminds you that she’s a regular around the way girl you can relate to.  Even if some songs are too pop-rap, and a little bland.  The point is she took musical risks.  She raps about her rocky relationship on “Thru Your Phone,” “I Do,” and “Ring,” before she bounces back and has a cocky moment on “Money Bag.”

Invasion of Privacy’s songs are calculated and on trend to what’s popular on radio.  Ms. B. visits her Latin roots on the Pete Rodriguez sampled “I Like,” and pays homage to the 305 by flipping Project Pat’s hit song into “Bickenhead.”  Both tracks are standouts along with “Drip” assisted by her baby daddy.

Cardi’s authenticity has been her talent from the beginning.  It coerces you to like her, and the music; which isn’t bad.  The album’s material is simplistic in its genius, and full of bars that’ll be used as IG captions for the remainder of the year.  Whether she’s “stanning” for Beyonce (mentions her throughout the album-3 songs,) or asking Rihanna for a threesome, you want to see her win.  Invasion of Privacy is teeming with anthems, because it speaks directly to the millennial generation.  Who other than Cardi B. is capable of conjuring up a gym anthem, breakup anthem, get money anthem, hoe anthem, and of course a twerking anthem all on one album.  The song selection process was well thought out.  The transparency on “Best Life” serves as the album’s heart, and opens the lenses to her real life Binderella story.  From that Cardi B. learned that fame’s true price is an invasion of privacy.

I can be your cup of tea or shot of Hennessy!
Related ItemsCardi B.FeaturedInvasion of Privacy
← Previous Story #AskB: My Son is Dating A Girl with a Kid and I Hate It
Next Story → Lauryn Hill Announces ‘The Miseducation of Lauryn Hill 20th Anniversary Tour’