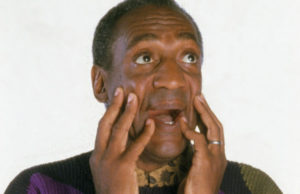 I received a text message from a friend that read “So sad about Bill Cosby going blind. SMH. But I don’t know if I’m supposed to feel sorry for him?” Immediately after reading that text I thought about my very own personal feelings towards him. I thought back to my two previous articles I wrote where I tried my best to address my feelings surrounding Cosby’s legal issues, and to also be fair. I know now that in my life he’s been reduced and stripped down to just Bill. No more Dr. Cosby or Mr. Cosby for me, just plain ole Bill!

In recent Bill news we learned that his health has taken a plunge. The fallen comic’s health is deteriorating to the point where he’s lost his eyesight. Reports state that he’s “completely blind” and has been housebound to his Pennsylvania home. And to add more fuel to his fire, his praised legal eagle attorney Monique Pressley has relinquished her partnership with him and his legal team. Do you feel sorry for the 79 year old? Are we supposed to feel bad for him? Are we allowed to feel bad? Many are left without a clue on what to feel for the man that has been “alleged” to drugging and raping two dozen women. As more hard concrete evidence has surfaced, many still want to believe that Bill is innocent, and they rightfully have their reasons. For crying out loud he gave us The Cosby Show and A Different World among other things. Is that what’s keeping us attached to this man? Are we forever indebted to him for such? The questions will only continue to be raised, but as I previously wrote “The main reason why so many are upset is because they aren’t able to distinguish Bill Cosby from Dr. Heathcliff Huxtable. We’ve placed this fictional man and family on such a high pedal stool, that we’ve censored ourselves the inability to see past the fictional character. ” There is no direct connection to Cliff and Cosby besides the face. Reiterating what Journalist Demetria Lucas said, “Bill Cosby is not your dad. Neither is Dr. Huxtable.  The Huxtables are a fictional family you are not related to them.” I, like many others once use to brag in glee, and even referred to ourselves as an “honorable Huxtable.” As of now I don’t even feel as proud uttering such phrase anymore. Dr. Cosby and Dr. Huxtable have been exposed for the world to see all along he was the real Dr. Hyde.

As of now Bill still sits on many “Most Hated” list, and I’m sure that’s where he’ll probably remain until his dying day. The world we live in isn’t an easy forgiving one, and many have been traumatized by what he’s done all the way down to the victims and fans. We shouldn’t forget or exclude the works of this man, but sadly, they’re tarnished right along with his image. Radio Personality Charlamagne Tha God said, “The best thing for Bill Cosby to do right now is die,” sad to say, but there’s truth there. Once he takes his walk to the stairway of heaven, all is somewhat forgiven. People will begin to sings his praises once again. However, there’ll be many left hating him still and calling him just plain ole Bill!