Erykah Badu “But U Caint Use My Phone” Mixtape Review 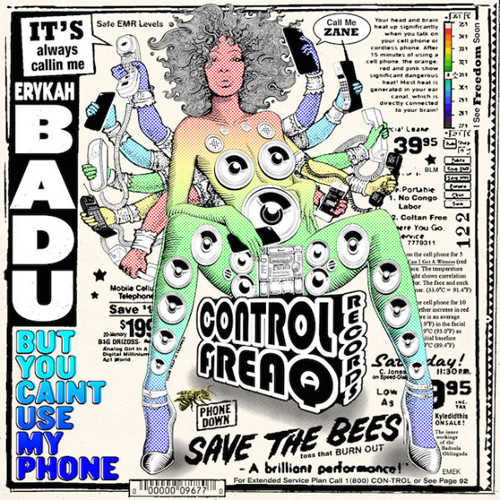 Ms. Erykah Badu, Analog Girl in a Digital World, Low Down Loretta Brown, Fat Belly Bella, Sara Bellum, Medulla Oblongata, and any other nickname of hers known, returns with new music since her 2010 “New Amerykah, Pt. 2: Return of the Ankh.” Hopping on the wave of Drake’s successful tune “Hotline Bling” the singer dropped her very own rendition with the duration of six and a half minutes in length. That put a spark in Badu and she recorded “But You Caint Use My Phone” in twelve days in her hometown of Dallas Texas.

“But You Caint Use My Phone” is titled after the punchline of her hit song “Tyrone,” and inspired by Drake. So much that upon releasing the leading single “Phone Down” she said “this one’s for Aubrey.” The two-perspective track talks about our cultures obsessiveness with our cellular devices, and our inability to properly enjoy anything. On the flip side, she’s speaking seductively to a lover who underestimates her ability to gain and keep his attention.

“I can make you put your phone down, baby we don’t need it. Every time you get a message, act like you don’t see it.”

Erykah is consistent with the mixtape’s telephone-theme start to finish. Although there isn’t much new material from Badu, it’s still an attention grabber and enjoyable listen. Hence, why she called it a mixtape, and not an album. The project contains more interludes than full-length songs. Most of the songs consist of flipped and recreated classics that pertain to the use of a telephone.   Taking on Usher’s “U Don’t Have To Call,” and New Edition’s “Mr. Telephone Man” is just the start. She reprised and remixed her ode to friend J. DIlla on the “Ghost of Screw Mix” of “Telephone” off her 2008’s “New Amerykah Pt. 1: 4th World War.” The project has only two features. One being her first baby daddy Andre 3000 on the closing track “Hello.” Andre kicks off the The Isley Brother’s classic “Hello It’s Me” with a poetic verse, before the two turn the song in a duet, like only they can. The other appearance is from a Drake-esque rapper on the two tracks “U Use to Call Me” and the 2pac song “What’s Yo Phone Number.” Badu announced via Twitter the artist isn’t Drake, leaving many to believe the unknown rapper is her 18-year-old son with Andre; Seven Sirius Benjamin. Erykah mentioned her son being an artistic asset to the project and a huge fan of Drake in a New York radio interview.

“But You Caint Use My Phone” is simply a “thank you” letter to Badu’s fans. Choosing to use all songs performed by men and replacing “girl” with “squirrel” to appeal both gender’s was brilliant of her. Incorporating humor (showcased the interlude on her ‘Hotline Bling’ cover) with her usual 808 batch of blended songs, which contains all elements of music. Despite the eleven tracks lacking in lyrics, it’s still groovy as hell, with a genius and artistic concept, while revisiting her 1997 hit song in today’s generation of music.

I can be your cup of tea or shot of Hennessy!
Related ItemsAndre 3000But U Can it Use My PhoneErykah Badu
← Previous Story Ty Dolla $ign “Free TC” Album Review
Next Story → The Huxtable’s & The Patterson’s: Reality vs. The Dream