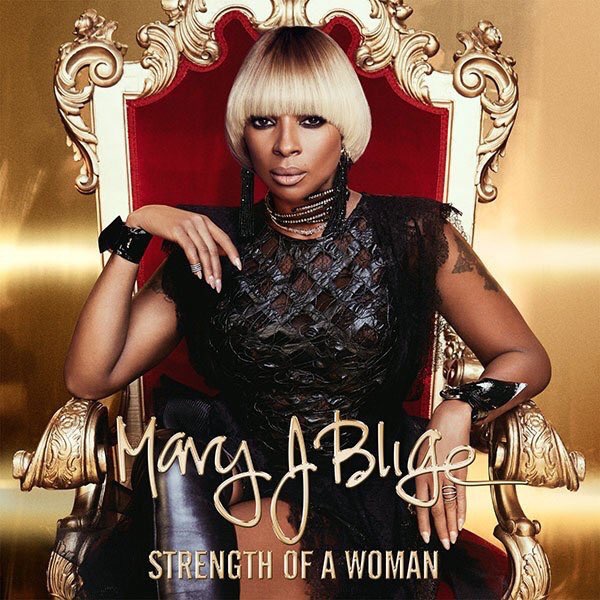 Following her 2014 visit to London, Mary J. Blige, the R&B legend returned to her core sound.  Partnering with Teddy Riley, B.A.M. and DJ Camper who produced the bulk of material; Blige presents her thirteenth studio album Strength Of A Woman, which showcases a woman’s true staying power.

Strength Of A Woman was recorded following the crumbling of Mary’s marriage.  Addressing the tumultuous divorce with the leading single “Thick Of It” was just the start.  “Set Me Free,” tells the bulk of the issue, while exposing the ugly truths of it all.  “How you fix your mouth to say I owe you/ when you had another b***** and taking trips and s***/ with my money for so long.” She sings before proceeding with “There’s a special place in hell for you.”  “It’s Me,” adds to the story and “U + Me (Love Lesson)” helps paint the process to follow, right before the benediction is served with “Thank You.”

While “Find Your Love” sounds out of place with the overall sound of the album, Blige did find her space in today’s R&B & Hip Hop state with the DJ Khaled produced “Glow Up.”  The track features pal Missy Elliott, as Mary lets it be known she’s out here enjoying life. “Ima Glow Up/ throw in ya face like yeah…”

Blige is the personification for the woman with strength.  The album’s title and song “Strength Of A Woman” is fitting for the woman and music.  It’s content is a shift from the previous projects that entered her catalog. It constantly contests to her strength, while slightly being reminiscent of her 90’s material.  It remains raw and honest, and she makes that clear on the gritty “Survivor.”  The track is a testimony to her unsuccessful period and overall resilience to survive the ups and downs of life. “I’m on my way/ nothing’s gonna stop me/I paved the way/ for so many to break free.”

Those who speculated Blige would return to her old script and harp on her divorce with a batch of sad songs were wrong.  Yes, it may have been the catalyst as she revisited her old script, but she then flipped it. Where as the first half is about the marriage, the second is about the woman.  Strength… is lyrically rich. It’s personal, and it’s more about self-recovery than pain as she shares on “Indestructible.” In a perfect world Strength… should’ve served as My Life II; but the world is far from perfect. The essence of Blige is her honesty factor, and her ability to provide a voice with every song.  And the albums opening track “Love Yourself” and lyrics said just that. “Truth can be the sweetest pain/ it can mess up everything/ it’s the only way to know/ I’m paying for it/ I’m changing for it.” Aside from the opening, is it’s closing track “Hello Father” where Blige reminds us that her strength of a woman is merely in her faith.

I can be your cup of tea or shot of Hennessy!
Related ItemsDJ CamperDJ KhaledFeaturedJazmine SullivanKanye WestMary J BligereviewStrength Of A Woman
← Previous Story #AskB: My Family & Friends Take Advantage of Me
Next Story → How Jill Scott Helped Me Through A Breakup