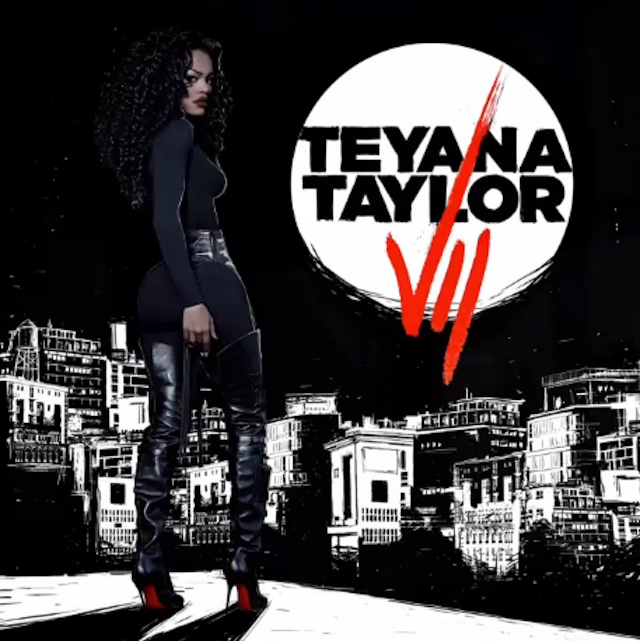 Teyana Taylor is The First Lady of Kanye West’s “G.O.O.D. Music” label. The Harlem born singer has been keeping herself in the spotlight for many years after making public awareness on MTV’s “My Super Sweet 16.”   Throughout the last seven (VII) years she’s released a mixtape, worked with Pharrell Williams, had her own Adidas sneaker, appeared in movies and dabbled in countless projects. However, what means most to her is the music, which she’s given us with her debut album “VII.”

“VII” opens up with the slow smoothness of “Just Different” that has an early Mary J. Blige sound to it, all before transitioning into the sultry tune “Request.” On “Request” she’s granting the wishes of her lover.

“Call me, I can be anything that you need me to be, just request it, boy I’m your hotline, your personal 1-900 number anything you want I’m your lover”

The song channels the sultriness of Brandy’s voice, which you can hear is an influence on her sound, just as Aaliyah is. Aaliyah’s influence is heard on “Do Not Disturb,” (if you see a live performance you’ll see for yourself) which features good pal Chris Brown. The good thing about this song is it doesn’t sound like a feature, more like a musical collaboration.

The Harmony Samuels track “Put Your Love On” has a Caribbean reggae sound that Samuel’s is becoming popular for. She vocally sounds amazing on the track, but the song abruptly ends before you can thoroughly enjoy it. The songs duration is only a few seconds past two minutes, along with the tune “In the Air.”

Following is the album’s leading single “Maybe” that has appearances from Yo Gotti and her label-mate Pusha T. The album also offers interludes “Outta My League” & “It Could Just Be Love,” however they serve no purpose as interludes being they’re full-length versions are offered as part of the album’s deluxe edition.

Standout track “Business” which contains portions of Ginuwine’s song “None of Ur Friends Business” talks about keeping the business that goes on in the bedroom private.

“Don’t ask me how was the sex, that’s between me, my man, and our bed”

Also the Fabolous assisted “Broken Hearted Girl” where she sings about not being ready to dive back into the pool of love. Instead she’s trying to get straight to the point.

“VII” lacks depth and is missing range in the material. The albums sound is one-dimensional as if she got too comfortable with the sound that has worked for her, and played it safe. She displayed great bravery by not having Kanye assist with any production on the album. Her freedom on the project is heard with the collection of songs. However, the album does leave you wanting more, whether that’s a good thing or a bad thing. It also makes you look forward to her musical growth. One thing is for sure; you can’t deny her strong presence or musical talent. And though it may have taken seven years for her debut album, it was well worth the wait, and she’ll be making music for another “VII” years.

I can be your cup of tea or shot of Hennessy!
Related ItemsTeyana TaylorVII
← Previous Story 7 Songs You Sing Written by Sevyn Streeter
Next Story → 5 Aaliyah Songs that Tell Her Life Story