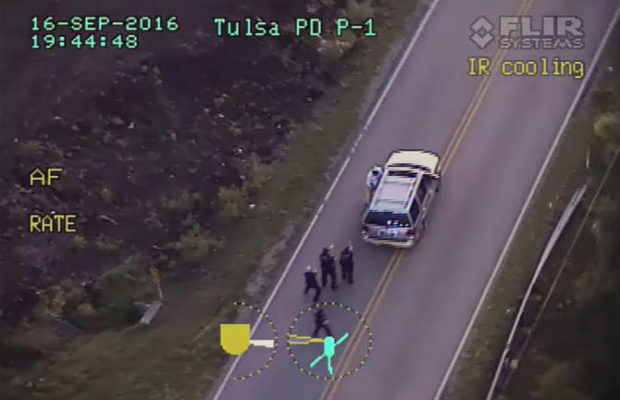 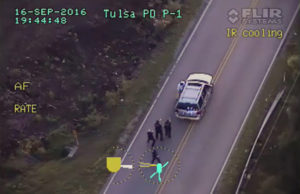 An unarmed Oklahoma man was fatally shot by a police officer after his car stalled on the side of the road Friday (Sept. 16) evening. Terrence Crutcher 40, was shot by a Tulsa officer after cops pulled up behind his SUV.

Tulsa Police Department released footage from their dash cam Monday (Sept. 19), you’re able to see police officers racing towards Crutcher just as they arrive.  One of the officers fired a taser, before the Officer Betty Shelby, fatally shot Crutcher. An officer is heard saying that Crutcher’s hands were raised on the recording. The footage goes on to show Crutcher lying on the ground as cops stand in a circle around him. He later died at a hospital.

According to the Associated Press, the Tulsa Police Department said that an officer spotted Crutcher while responding to another call. The officer called for backup, while two additional cops were approached by Crutcher as they walked towards his vehicle. Crutcher “refused to follow commands by the officers” a spokesperson for the Tulsa police department said before the video was made public. She added, “Every situation is different. Officers are involved in typically fast-moving situations, and officers who choose to use force, base (those decisions) on the situation involved that they are facing.”

I can be your cup of tea or shot of Hennessy!
Related ItemsshootingTerence CrutcherTulsa Oklahoma
← Previous Story ‘Empire’ Cuts Ties with Timbaland
Next Story → Juicy J #MustBeNice Mixtape *Stream/Download*