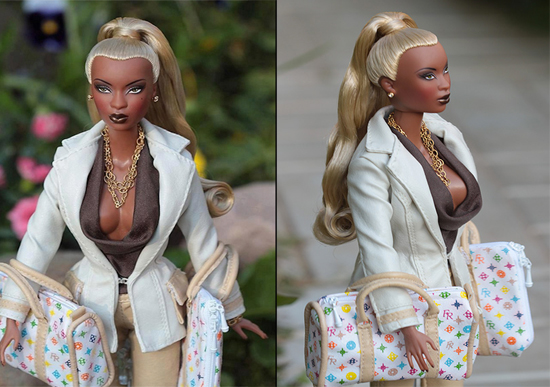 The old saying goes “blondes have more fun” but do they really? Or is that just a figment of the imagination from the person who is blonde? Well it seems that being blonde has become an epidemic among African American women in Hollywood, well as the hood. Black women are going blonde more and more as each day turns. Not that there’s anything wrong with it, but with the high volume of black women wearing blonde hair we have to ask the questions why and when did this become the popular thing?

I’m all for self-expression in any form whatsoever, and at some point in everyone’s life we end up wanting to alter or enhance our outer beauty in some form, but is black hair boring? Having uncolored, natural black hair is much healthier opposed to wearing bleached blonde hair, so why have so many women, especially African American women become obsessed with being blonde?

The number of African American women rocking blonde tresses in Hollywood or “Black Hollywood” has increased at a rapid rate in ladder years. It appears that once black actresses and music artists achieve a certain level of success they alter their image first by changing their hair color from dark to light. It’s as though they now try to appeal to a broader audience and going light with their hair is the way to crossover to that wider audience. As though they’re trying to pass. Being blonde seems to go hand and hand with being of a light complexion and the way to achieve success. Many celebrities have gone from dark hair to light once their careers have skyrocketed or they try re-inventing themselves to achieve the success they desire. Ciara, Keyshia Cole, Christina Milan, Keke Palmer etc. and even now Ashanti has gone blonde with the rest. Tamar Braxton who wears her hair blonde said on her reality show “Tamar and Vince” that she wears blonde hair because her husband is attracted to white women. It seems as though Beyoncé gets lighter and brighter blonde with every album. Her skin complexion evens looks lighter, and in a number of her photos she looks like a Caucasian woman. In recent months Beyoncé freed herself of her long blonde tresses while touring by “cutting” her hair short into a pixy cut, only to gradually put her blonde extensions back in with each new show on the tour. Then you have Kim Kardashian who isn’t a black woman, but adored by a majority of the African American community. In the recent months Kim herself has even went from dark to blonde. Here is a woman who is known for her signature beautiful dark hair and yet decided to go blonde. Kim’s dark hair at one point sparked an epidemic with many and even had blonde Caucasian women going dark.

Does going lighter equal success or “made it status” somehow? What message are these celebrities conveying to the public and youth? Certainly, not the proper information or severity on how damaging going blonde can be, if it’s not done right. Still, it can possibly take a toll on the hair later, and the upkeep is strenuous. Of course they make it look easy, and that’s because they have a glam squad who has top of the line products and ample fake hair to achieve their desire looks.  They have the disposable income to always look the par, which most don’t have the financial means to maintain the upkeep that blonde hair requires.

I know most won’t admit that men love blondes and have a fascination with blonde hair women regardless the tone of their skin. Majority of men think that blondes are sexy and will most likely choose them over the dark hair girl. However, we can admit that African American women have fallen victim to what America considers beautiful. Therefore many of them aspire to be this “Black Barbie” figure. That has been created and accepted by the African American community. African Americans have self-prejudice issues without our own community so it’s easy to adopt the agenda pushed on us that light is right. That’s why women in Hollywood and the hood want to be blonde bombshells. You never heard of any sexy nicknames for the dark hair and brunette women, have you? You never heard anyone call them brunette bombshells. More so I still believe that majority of black women in Hollywood are emulating the white woman and America’s standard of beauty by becoming blonde. We need to teach our youth and remind them that beauty is from within and they are fine they way they are. As much flack as Jayz and Beyoncé catch from Blue Ivy’s hair always looking a damn mess. I must say they got it right by not exposing her to lavish and extravagant beauty measures or placing any stigma on her when it comes to her hair. They keep it natural looking as possible and that’s keeping Blue grounded to her roots (literally lol). I guess we all should be thankful and happy with what it is that we were given by God when he created us. Know that you don’t have to be blonde in order to be a bombshell.