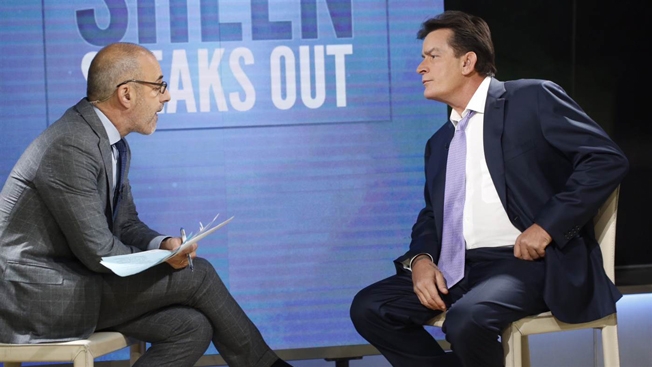 By now we all have heard about actor Charlie Sheen coming forward and revealing to the world that he is HIV positive. The famous actor took a seat with journalist Matt Lauer on the highly rated news-broadcasting program “The Today Show” to announce the news. Rumors have been circulating about Charlie’s health status for some time now, so he decided it was time to divulge the truth.

Empathizing and sympathizing with his current situation is easy to do. As humans, we concern with topics of this matter, and we know the risk and outcome of this illness. When we add in the factor he has children, and a family, we instantly become compassionate, but we have to take into consideration his intended motives. Could coming clean be a way to avoid and prevent future lawsuits from former sexual partners? The thing about Sheen is that he has a way of turning his lemons into lemonade, so it’s hard to ignore that this all seems very much calculated.

Charlie alleged that so-called friends were keeping his illness a secret while extorting money from him. Stating that he spent millions to silence his HIV status from the public. As much as $10 million dollars was spent in what he refers to as “shakedowns.” Imagine if a former ex-girlfriend, stripper or prostitute came forth with this information, would many have believed them? The news could have easily been swept under the rug and treated as another tabloid story, that’ll make its way on an end of the year list review of “crazy things that happened in 2015.” Can it be he was keeping his illness a secret due to the negative stigma the disease still carries? To many, it’s still seen as a death sentence, due to lack of knowledge.

His coming clean is not coming off as raising awareness for the ones living with HIV and AIDS virus. It’s being pushed as a promotional tool to advance him in some way. Sheen has cashed in on his prior pitfalls in life, and from the way this is being treated with his interview with Matt Lauer it comes off as an agenda. How many other people get a national platform to divulge their status? And all they ask for in return was support and forgiveness from the public. He merely took the opportunity to tell his story the way he wanted to, before the tabloids did. With World Aids Day around the corner I’m not doubting his duty to do good, but are his intentions good? In his interview, he spoke about his financial situation not being the best, being he’s no longer the highest paid actor on television, and currently unemployed. He also mentioned that he has things in the works and talked with studios about his status prior giving the interview. Seems like he aligned all his ducks professionally before coming clean to solidify future jobs.

Being able to silence his illness for 4 years continues to support theories of the HIV & AIDS virus being a homosexual and black thing. Most African Americans are without proper medical access, so their testing is done at local clinics, and health centers, which are funded by the government. That’s how the government keeps their dollars coming in, by the use of blacks who are crippled by the system. All their cases are reported, which is why African Americans are the highest rated new cases affected with the virus, especially the females. If the African American community were afforded the opportunity to silence their status, (such as Charlie) we may see the statistics go down at an alarming rate. It also continues to perpetuate how the rich and famous are privilege and has an untouchable factor, and seem above the law at times. Will Charlie make it his cause due to responsibility, or continue to use his platform to keep money in his pocket? That’s how we’ll be able to decipher if this was genuinely done, or if it’s another Charlie Sheen scheme.