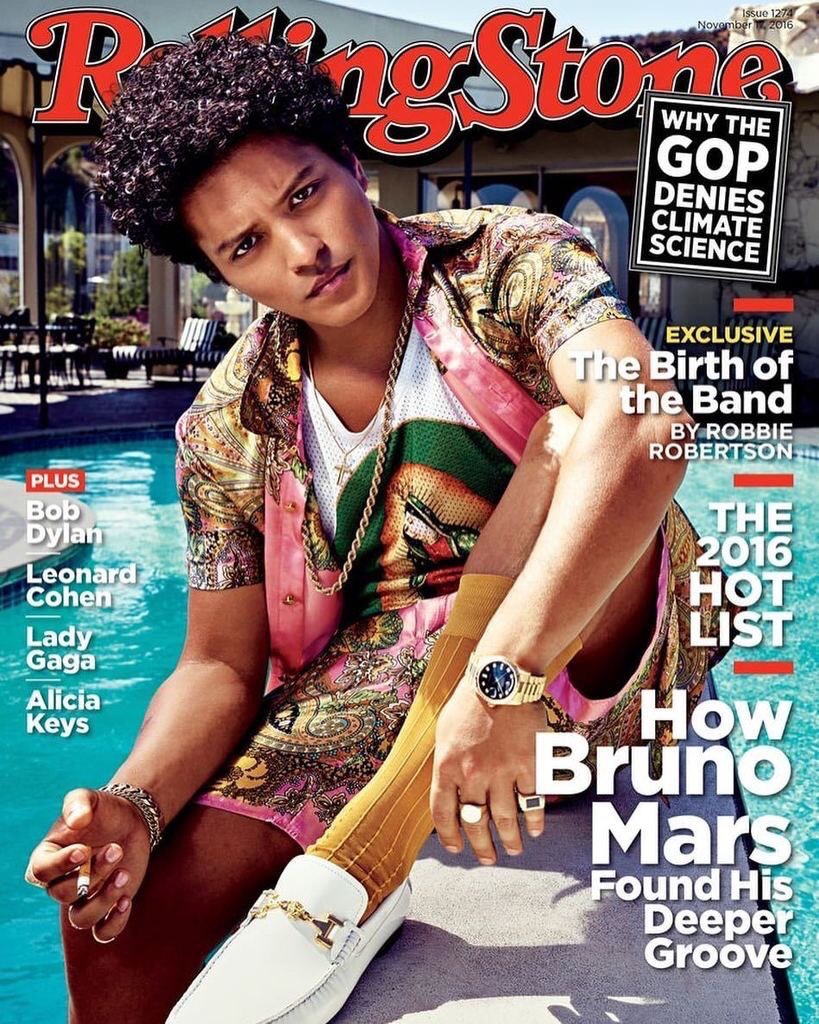 Bruno Mars is in promo mode for his upcoming album 24K Magic, which is due out November 18th. Yesterday he chatted with Zane Lowe of Apple Music about the project, where he described it as a movie-making inspired album.  Now he’s gracing the cover of Rolling Stone magazine’s newest issue.

In the cover story titled: The Private Anxiety of a Pop Perfectionist. Bruno spoke about his mother’s death, Kanye West dissing him, his super bowl performance, and of course his music. Stating he wanted he wanted to create the feeling of R&B he’s fallen in love with as a child, “There’s nothing more joyous for me than those school dances,” says Mars. “Slow-dancing at the Valentine’s Day banquet with the girl you have a crush on, and the DJ spins “Before I Let You Go,” by Blackstreet.  And that shit is magical, and you think about it for the next eight months.” 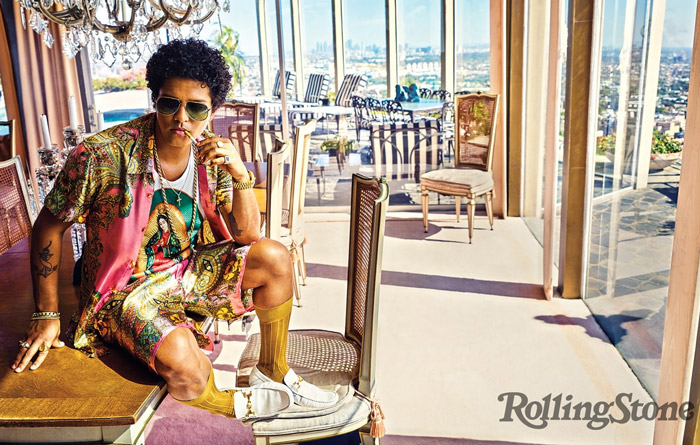 On his mothers death: “To this day, I don’t know how to handle it,. That piece of your heart is just gone forever. I don’t even know how to talk about it with you. It’s a nightmare. It’s literally a nightmare.”

On “Uptown Funk”: “Coming off the biggest song of my career, it was super-daunting to come in here. I don’t know if people are going to love this shit. I don’t know if radio is going to play it. But what I don’t want to have happen is I put it out and say, ‘Damn it, if I’d just done this and this, maybe it would have had a shot.’”

On Kanye West Dissing him: “It’s Kanye — bottom line, at the end of the day, we need Kanye. But what he said wasn’t a sting. You can come at me all you want — I’ve set myself up for that. But I am my own biggest critic. Whatever anyone says to me, they don’t know shit. But me and him, we’re cool. He called me and apologized. Kanye loves me, man. You know that. Who doesn’t? I’m Bruno Mars!”

On the Super Bowl: “God bless the Super Bowl. They hooked me up, they took a chance on me. But I had to keep reminding them why they took a chance on me. You put that camera on my band and me, and I got you…They wanted to show a shot of the audience wearing these light-up bracelets. I told them, ‘If you take that camera off me, you’re doing yourself a disservice.’ And what happened? They spent all this money on these things, and it didn’t work.”

I can be your cup of tea or shot of Hennessy!
Related Items24K MagicBruno MarsRolling Stones Magazine
← Previous Story Blac Chyna & Rob Kardashian Goes to the Bank with Birth of Baby
Next Story → Here’s Why Kanye West Abruptly Ending His Concert; AGAIN!