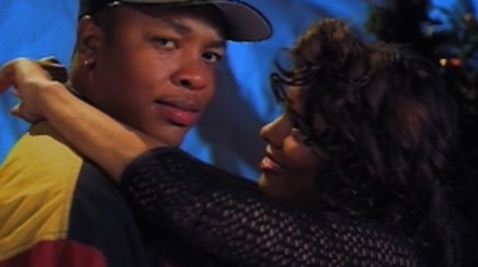 Producer/Rapper Dr. Dre is threatening to sue Sony Pictures over new TV film depicting him as a woman abuser.

Singer Michel’le has been telling her story regarding her love affairs between rapper Dr. Dre, who’s real name is Andre Young and Suge Knight for sometime now. Well the popularity of her story caught the attention of many when they learned the true meaning of “Beats by Dre.” Michel’le revealed in several interviews her alleged beatings from Dre while the two were dating in the 80’s.

The TV Movie Surviving Compton: Dre, Suge & Michel’le is scheduled for release this coming weekend October 15th on Lifetime. However, according to TMZ Dre’s attorneys, sent a cease and desist letter to the company promising to take legal action and saying that Michel’le who is the mother of one of Dre’s children, “never sought mediacl treatment or filed a police report.” Dre denies abusive allegations of ex-girlfriend.

The film is to chronicle the singer’s love life surrounding the two men, and show her abusive relationship with Dre. The TV movie was birthed behind the popularity of last year’s blockbuster Straight Outta Compton biopic that ignored Dre’s relationship with Michel’le and his mistreatment to women. Along with Michel’le, journalist Dee Barnes and rapper Tairrie B have all written in detail about Dre’s alleged abuse.

Michel’le has accused Dre of breaking her nose and ribs, and giving her several black eyes. Michel’le and Tairrie B did not press charges, but Dre was charged with aggravated battery over the incident with Barnes in 1991. He pleaded no contest, and was fined $2,513 and sentenced to 240 hours of community service.  A civil suit was settled out of court.
Dre has not responded to the allegations individually, but last year apologised in the New York Times to “the women I’ve hurt”. He wrote: “Twenty-five years ago I was a young man drinking too much and in over my head with no real structure in my life. However, none of this is an excuse for what I did. I’ve been married for 19 years and every day I’m working to be a better man for my family, seeking guidance along the way. I’m doing everything I can so I never resemble that man again.”

The biopic is set to air Saturday October 15th. Peep the trailer below. Will you be watching?

I can be your cup of tea or shot of Hennessy!
Related ItemsDr. DreLifetimeMichel'leSurviving Compton
← Previous Story BET’s ‘The Quad’ Brings the HBCU Experience Back
Next Story → Cover Girl: Gabrielle Union Covers Essence Magazine