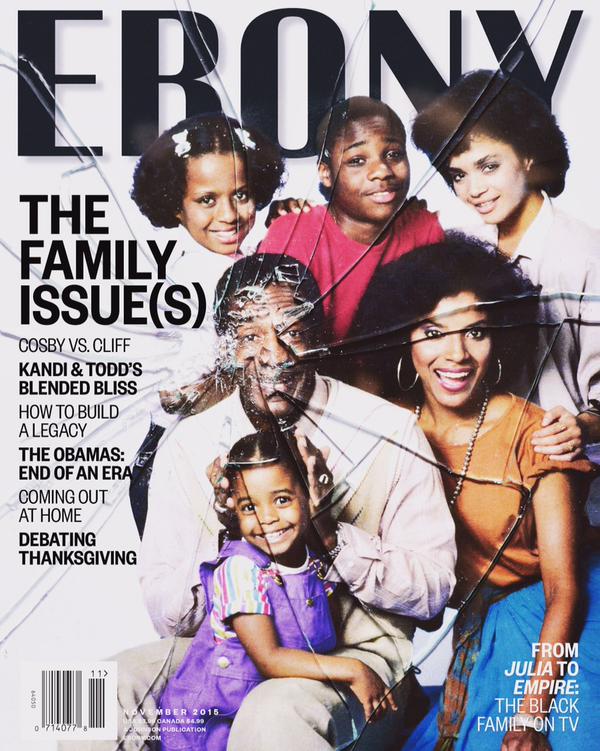 “What surprises me most is that people who Mr. Cosby would have been extremely critical of are some of his loudest defenders”- Jamilah Lemieux, senior editor of Ebony Magazine.

Pushing the envelope, ruffling feathers, and creating dialogue are all the components that make some things so unique and great. Well, that’s exactly what Ebony magazine did when they unveiled the cover of their November 2015 issue, titled “The Family Issue(s.)” The cover is an image of the beloved Huxtable family (minus Sondra) framed with a shattered effect casting over the family portrait, and the brokenness sitting dead smack in the middle of Bill Cosby’s face. A shocking sight to see, and an image that left many uncomfortable. The 70-year-old magazine, that’s still ran and owned by African Americans (contrary to belief) has stood its test of times in publication found itself in the hot seat with readers who are non-supportive in what they call a “tear down.” Ebony’s intentions were not any of malice nor slanderous, in truth; the magazine has been extremely supportive of Bill Cosby, The Cosby Show and his family throughout the years. He was featured many times as a cover story, in the magazine’s history, so this isn’t anything different or new for Ebony. Have you asked yourself how hard of a decision this may have been for the magazine to do this story? Have you considered saluting them for being the only black publication to step up and do a story on Mr. Cosby, but more importantly were they left any choice, if they wish to continue servicing, and being the voice for African Americans. Social media outlets such as Twitter, Facebook, and Instagram have all voiced their disgust of the magazines choice to place the Huxtable family on the cover. Claiming it’s a personal attack on Bill, who’s been accused of drugging and raping more than 50 women. In the midst of the negative support, the magazine has also received some encouragement for their brave move.  Doesn’t Ebony have a responsibility to the African American community to speak up on this topic and not sweep it under the rug? While many continue to throw their opines about the magazine’s cover, they [Ebony] stand behind their choice and remain firm, as they continue to defend themselves. Look at it as a favor; Ebony has decided to take on a much-needed conversation that Cosby himself has continued to ignore. 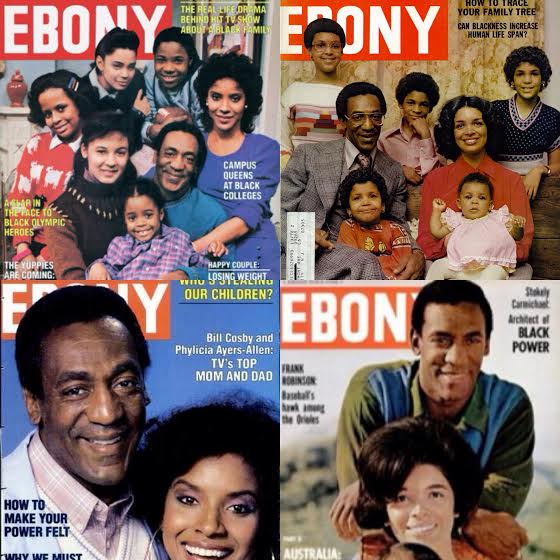 “Bill Cosby is not your dad. Neither is Dr. Huxtable. The Huxtables are a fictional family you are not related to them.” Said journalist Demetria L. Lucus of www.abelleinbrooklyn.com in her essay “10+ Things to Remember While You Freak Out Over Ebony Magazine’s Cover” The main reason why so many are upset is because they aren’t able to distinguish Bill Cosby from Dr. Heathcliff Huxtable. Ebony’s image represents the shattering of our distinct connection of Cliff and Cosby. We’ve placed this fictional man and family on such a high pedal stool, that we’ve censored ourselves the inability to see past the fictional character. Yes, we hold the Huxtable family near and dear to our hearts, and it’s a sensitive subject for us, but what good are the Huxtable’s to our lives and families if we can’t be honest about their flaws. Cosby painted us this perfect family portrait, but we’ve come to realize that everything that glitters ain’t gold. He flawed the Huxtable’s by placing his personal name on the show, when we know the shows primus is “loosely” based off his personal life experiences with his family. We can easily argue that there isn’t a direct correlation between the two men, but is there being that the show was linked to who he was? Once we are able to process and grasp that concept, we might be able to move forward from this debacle and see that his works aren’t being discredited in Ebony’s cover story. That they’re merely serving as a prism for our own families.

“We are not a problem people; we are people with problems. We have historic strengths; we have survived because of family”- Dorothy L. Height

Once the majority gets pass the “judge a book by its cover” mentality they may be able to fully read and deceit what staff writer Goldie Taylor is conveying in the article. For those who have not chosen to protest the magazine (until Beyonce graces the next cover,) will see it’s not a “tear down” or a personal attack like many are portraying it to be. The article touches on the show’s overall impact despite what Bill has done in his personal life. It explored how black families were viewed as a whole from the 60’s until now. The show being a beacon and catalyst for black families on television, and because of it, there is a demand for our stories, and positive images to be shown to the masses. It [the show] erased the stereotypical image, and made it very clear that these kind of black people do indeed exist. Not all successful households are a product of the “come up” story. They do exist and consist of professional working parents like Clair, an attorney, and Cliff a physician (OB/GYN, go figure.) “The Cosby Show” allowed white America into their homes, (which is our homes) every Thursday night for eight seasons (1984-1992.) For many whites, that was the only image of a black family they’ve known. (Regardless if they believed it or not) And if the Huxtable family was our representation, then they did well, and served a greater purpose. The show helped polarize the African American family image, and showcase that not all black families consist of a single-parent home that rely on government assistance for survival, the way television has done before its time. Honestly, it [article] spoke very little on Mr. Cosby’s legal situation.  Yes, he’s broken our hearts, and may have shattered the legacy of television’s greatest family, but I’m sure the present or future will provide another black television family even greater than the Huxtable’s.

I can be your cup of tea or shot of Hennessy!
Related ItemsBill CosbyEbony MagazineThe Cosby Show
← Previous Story Tamar Braxton “Calling All Lovers” Album Review
Next Story → Halle’s Berry Ain’t So Sweet