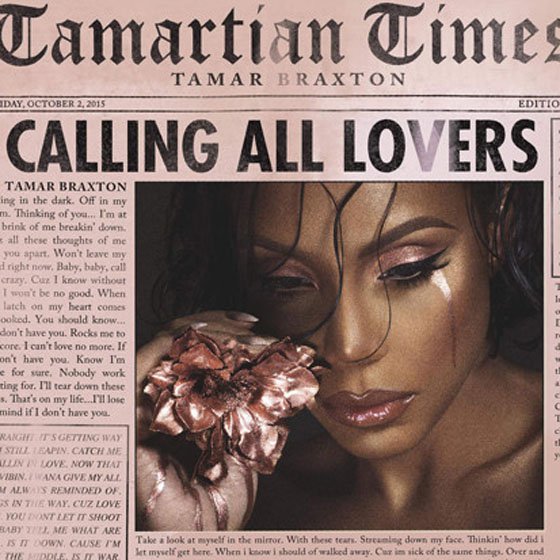 The youngest of the Braxton clan Tamar releases her eagerly follow up to 2013’s album “Love and War.” “Calling All Lovers,” offers a slight variety of sounds, and although that may be the case. The sophomore jinx (actually 3rd album) is non-existing.

Braxton showcases her larger than life personality with a dialogue closing out the bluesy and soulful “Simple Things.” The raw emotion of uncertainty and lyrics to “Broken Record” easily puts you in a trance, trailing tracks are “Circles” and leading single “If I Don’t Have You,” that sound similar in production, as they tail one another, but still pleasing to the ears. “Raise the Bar” has no choice but to standout on the album. With its beautiful yet haunting harmonies, and perfectly placed background vocals, makes it an eargasm impossible to ignore. If that doesn’t grab your attention, there are the lovely lyrics to match.

“Every wrong turn that I made, every scar, every burn, every little pain led me to you”

“Calling All Lovers” is classic and authentic R&B. The LP’s sequence is questionable with them placing all the up-tempo tracks in one section. The bulk of the album is down-tempos, which isn’t too bad, being it compliments the overall album theme. However, “Must Be Good To You” channels the disco era, while “Catfish” has a 90’s vibe with the catchy line “don’t flex.” The project is full of vocal acrobats that flip into pure vocal perfection, and could be condensed in songs if the batch of songs weren’t so darn good. “Calling All Lovers” defines vocal performance down to its last track “King,”(standard copy) The piano ballad paints a medieval time picture, as she expresses for devotion and undying love for her knight as he goes off to war or becomes a P.O.W. It’s safe to say that Tamar has outdone herself this time around, because “Calling All Lovers” doesn’t contain a single album filler.

I can be your cup of tea or shot of Hennessy!
Related ItemsCalling All LoversTamar Braxton
← Previous Story Drake & Future “What A Time To Be Alive” Mixtape Review
Next Story → Ebony’s Controversial Cosby Cover; You Mad or Nah?