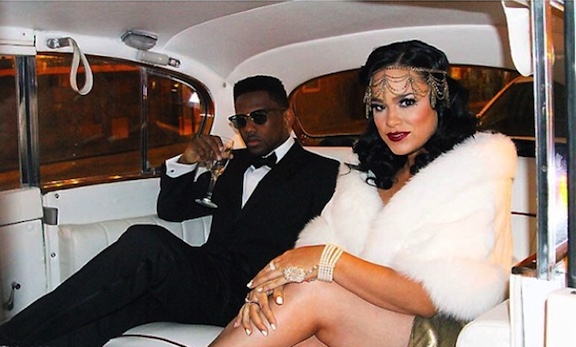 Just when you thought everything between the couple was fabulous, and they’ll meet each other at the alter, it all fell apart.

According to the streets reality star Emily B. has parted ways with her longtime boyfriend rapper Fabolous.  The reason behind the break up are the rumors that Fab sired a baby outside their relationship with a woman from Atlanta.  It’s been alleged that Emily found checks that Fab, real name John Jackson was issuing the woman to keep quiet.

Although Emily B hasn’t confirmed the split, in true ‘a woman’s fed up’ fashion, she did deleted every single photo of him off her Instagram page.  She even did the whole ‘I’m single building my empire’ post in effort to make the message loud and clear. It’s sad, because, just days ago rumors were circulating that the pair snuck off and gotten married. I guess that’s not the case.

The two have been dating for over 10 plus years, and have two boys together. A seven-year-old Johan, and a one-year-old. Emily has a 18 year old daughter from a previous relationship.

In addition, word on the curb is Emily has found a new man. It’s alleged by itsonlyentertainment.net and other media outlets, that she’s dating Harlem rapper Mase. According to the rumors, her and Mase have gotten close while on the Bad Boy Reunion Tour. Emily is on the road with the gang styling French Montana, and from there her situationship with Mase blossomed.