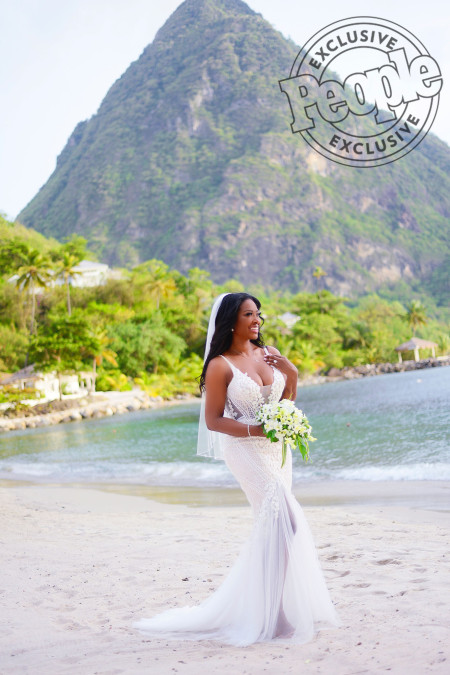 The Real Housewives of Atlanta star Kenya Moore twirled on down the aisle.  The former Miss USA, 46, tied the knot with Marc Daly, 47, in a private ceremony in St. Lucia.

In her exclusive with PEOPLE she gave up all the details pertaining to the big day. “It was just so perfect,” says Moore.  The eloping couple met a year ago, but began dating back in December. They exchanged their “I do’s” in a beach ceremony at sunset under an awning of white roses and that overlooked the Caribbean island’s picturesque pitons. 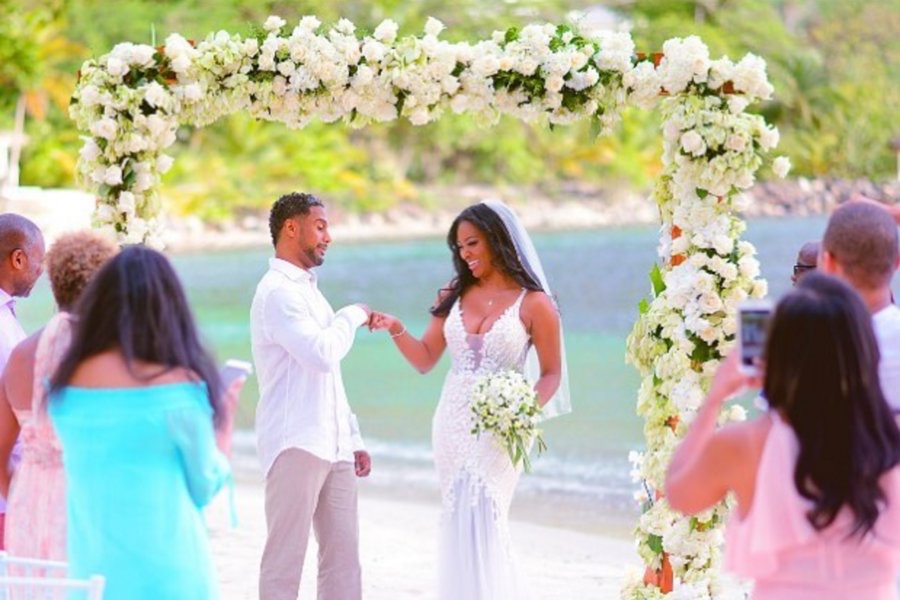 “We wanted something simple an not overly complicated,” she explained, adding that Daly is “extremely romantic” and heavily influenced their day. “He didn’t want something for show. He didn’t want it to be left up to other people’s interpretation of love. He just wanted it to be what he sees it: him looking into my eyes and us being together. It was just two people in love who wanted to get married.”

To my husband, Happy Father's Day to you and all the great Dads. We met a year ago but didn't speak again until December. Since we reconnected you have been my everything, my one and only, my heart…I love you. #devotedwife #family #happyfathersday #truelove #bliss

Attendees included, Brandon DeShazer and Moore’s father who was there celebrating his birthday. Other family members included Aunt Lisa, Aunt Lori, and Kenya’s high school best friend Shonda. “It meant so much to have her there,” says Moore. Why some may be surprised by Kenya’s rushed affair, even the person who introduced her to her husband wasn’t invited. Hell, he didn’t even know they were getting married. Chef Roble sent his congrats to the newlyweds via a Instagram post.

I'm so happy for y'all! When I introduced you two I KNEW y'all would hit it off but this is just WOW! ❤️???????????You got a GREAT man Kenya!!! That's my man right there. I'm tryna be like him when I grow up! Congrats y'all!!! ???#Repost @thekenyamoore ・・・ Marc, you are the best man I have ever known. Thank you for loving me unconditionally. My #rideordie #bonnieandclyde

The Dress: a stunning mermaid cut gown with sheer panels and a plunging neckline that perfectly hugged her every curve. Covered in sequence and beading flower appliques, Moore worked with dressmaker Pallas Couture to design the gown especially for her. It shipped it from Australia to the reality star days later. “The dress was perfect when I saw it,” Moore gushed. “I’m a woman of a certain age, but my husband wanted me to look sexy. And it was a beach wedding, so I didn’t want anything too formal. I knew this was exactly what I wanted when I saw it. “I just felt so beautiful and grown and sexy and powerful and feminine — all at the same time,” she added. Kenya made the decision to give the dress away to a deserving bride.  She posted a photo of it with instructions for a giveaway contest on her instagram.

#giveaway I want to share my blessings with a wonderful bride-to-be that may be having difficulties paying for her wedding. I have 2 gowns from celeb apprentice and I want to give them to someone who is really deserving. What to do: Tell me why you need this beautiful wedding dress and why you love your fiancé. I will announce the winner next week. About the dress: designer: Jasmine. Size : 14US UK16 Will ship to winner worldwide Rules: must follow me Tag someone who needs and deserves it. All my love… Mrs.?? #kenyamoore #weddingdress

CONGRATS: It’s going to be interesting to see how all of this plays out on the upcoming season of Atlanta Housewives, which begins taping this August.

I can be your cup of tea or shot of Hennessy!
Related ItemsBravoChef RobleKenya MooreMarc DalyPEOPLEReal Housewives of AtlantaSt. LuciaWedding
← Previous Story ‘The Carmichael Show’ Brilliantly Uses the N-Word
Next Story → NEW VIDEO: Tamar Braxton – ‘My Man’