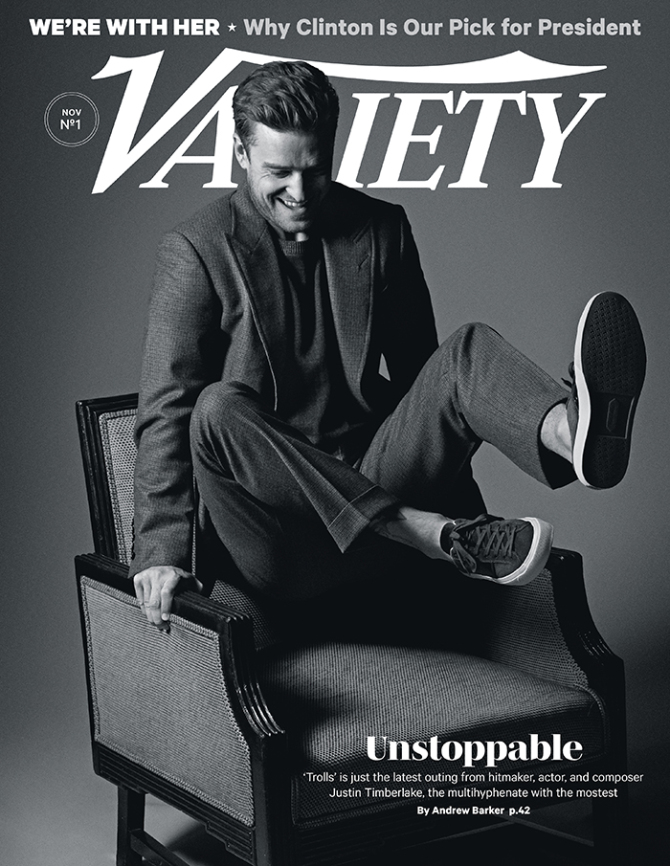 Timberlake lent his voice for the lead character of the animated comedy, Trolls and serves as executive producer of music. “Can’t Stop the Feeling!” is one of his original songs for the film, and stands as the best-selling single of 2016. The song is also being whispered as Oscar-worthy.

Timberlake stated that he’s currently in the studio with his go-to producer Pharrell Williams recording songs with an eye toward his next album.

“I wouldn’t say [my new music] is the antithesis of 20/20, but it does sound more singular,” Timberlake told Variety in this week’s interview. “If 20/20 sounded like it literally surrounds your entire head, this stuff feels more like it just punches you between the eyes.”

Once again Timberlake has also teamed up with hit-maker Timbaland to create new music. “My connection with Justin is very deep,” says Timbaland. “Just because I like what’s in his brain, and he likes what’s in my brain. And our process is we just sit around, talk and vibe, catch up on life. All the while, the musical equipment is hooked up, and we play little sounds until we find something and go, ‘Ooh! Let’s do that.’ When a sound stops the conversation, that’s where we start.”

Back in March Timberlake shared a photo of his mentor Pharrell and himself in the studio and immediately rumors began to circulate that a new album was in the works. Pharrell is noted to having a significant impact on Justin’s solo career, executive producing his 2002 Justified album. Williams told Variety that “I would pay Justin a huge compliment to say he’s discovering who he is now songwise. I think we’ve got a good solid six that are like, ‘Whoa, what was that? Play that again.”

Pharrell also added, “For the biggest pop stars in the world, the place where they have the most trouble is honesty. It’s hard for them to know that the beauty of a record, the sweetest spot in the song, is where they show vulnerability. Because there’s a formulaic sort of vulnerability, like, ‘Baby, I can’t sleep without you …’ and that’s not really it. But if you’re able to really screenshot your own vulnerability, and frame it properly, and color-correct it, then it becomes something that every human can relate to. And I think Justin is in the place where he’s mastering that right now.”

Sadly, there is no actually time frame to when we we’ll get to hear any of this new music. “I think everyone I’m working with right now knows that I’m notorious for being like, ‘Yeah let’s work. I have no idea when I’ll put it out, though…I’ll put it out when it’s done—when it feels right,” said Justin.

This new album will serve as the follow up to his 2013 The 20/20 Experience. Read full Variety interview here.

I can be your cup of tea or shot of Hennessy!
Related ItemsJustin TimberlakePharrell WilliamsTimbalandVariety
← Previous Story Charlamagne the God Pens Book: ‘Black Privilege’
Next Story → Lil Wayne Says He’s Not Connected to the Black Lives Matter Movement