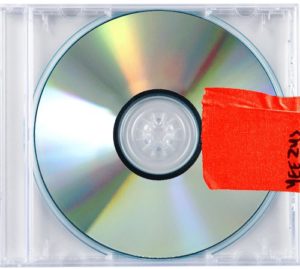 Kanye West, the super producer who became popular for sampling old soulful songs and turning them into hip-hop hits. His popularity continued to grow, as he became people’s favorite fashion icon, all while metamorphosing into one of the most influential rapper of his time. Creating his own sound and style of rhyming, West has proven he is one rapper that will be celebrated and hated all at the same time.

Fans of Kanye know that he takes a new and refreshing approach with every album. One can only imagine how that thought process and approach went for the rappers sixth studio album “Yeezus.” The title alone will easily strike a nerve with most, but we know West loves to push the controversial envelope all while being creative.

The albums artwork is slightly strange for even Kanye. A blank disc and case with no writing, no album sleeve full of liner notes and pictures from a lavish photo-shoot! No creative drawing done by Kanye himself! And let’s not forget his mascot, the Dropout Bear! A simple blank disc and case, oh but wait, that red sticker. What is Kanye West conveying to us with this new look? It seems as though he’s telling us he needs no fancy artwork or gimmicks. He’s saying he doesn’t need any of that to sell his music. The music will speak for itself and sell itself. And as far as the red sticker, well you can’t place a label on him nor place him in a box. Cover up the label if you want because it’s all about the product.

The funky, electric, dance, melodic sound that opens the ten track album (rumor is, there are 4 extra songs for a deluxe version that has features from Drake & Jay-Z both, plus his ode to Kim) is a clear indication that the rapper is taking us on a new ride.

Then comes the transition of heavy drums and noises that reminisce of Africa, as if it could be the theme music for Shaka Zulu. The beating of the drums throughout the song along with Kanye’s flow has an adrenaline rush of a warrior. If any rapper would have a song titled “Black Skinhead” it would of course be Kanye. (or Nas).

“For my theme song, leather black jeans on, my by any means on, pardon I’m getting my scream on”

“New Slaves” is an interesting listen too, though it seems he’s complaining about everything he’s worked hard for. However, it’s the song “I Am A God” whose title alone might raise some eyebrows.

“I am a God; even though I am a man of God, my whole life in the hands of God, ya’ll better quit playing with God”

Other songs on the album include “Send It Up” “Hold My Liquor” and “I’m In It.” The album also has close to any features. Kid Cudi, Frank Ocean & God are the only features the album has noted, and you’d barley know that they exist.

One song in particular that stands out is “Blood on the Leaves.” It samples “Strange Fruit” by legendary jazz singer Nina Simone, and throughout the song you hear “from the popular trees” being recited. Catchy hook and a relatable topic, but I feel the song has a double meaning rather just than a rocky relationship. Being the overall theme of the album, the songs’ title, and other album song titles, plus chosen sample. In this practically song he may be talking about the social injustice of the music industry. How artist work hard towards gaining their wants, but when they become the popular one, they (record label/industry) will take complete control of you, turn you out and make you their slave. Giving you just enough to hang yourself from the popular trees, screaming, “We could have been somebody” (think Big Red & Bird in The 5 Heartbeats)

Before Yeezy finishes the album he gives us “Bound 2” which sounds like the Yeezy we fell in love with on “College Dropout.” His signature soulful sample, along with his witty, cocky and arrogant lyrics leaves you to believe that this may have been a left over track from the “Late Registration” era.

Yeezus may sound dark, different or even strange. The album displays major growth in instrumentation and lacks what’s known as the traditional Hip Hop beat. Remember, he’s an artist who will always grow musically with his sound whether he’s having fun, being transparent, or conscious.  He’s a game changer that we place in a box, but he’ll be the one to replace its original label and cover it up with his red sticker.