Home / Entertainment News / VIDEO: Bruno Mars – ‘That’s What I Like’ 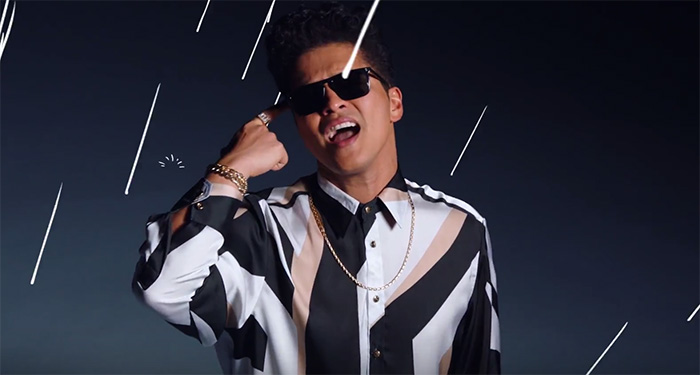 The last few times we’ve seen Bruno Mars take the stage he’s performed “That’s What I Like,” so it was no doubt that it’d be his next single of 24K Magic.

Directed by Bruno and Jonathan Lia, Mars shows off his dance moves in his 90’s inspired track pants and silk shirt.

Just finished shootin it! I'm gonna edit it, take a bubble bath & then we party. Gimme 2 hours! Let the count down begin #TWILVIDEO

“It’s what we want to bring to the table musically. You hear these ’90s influences on the whole album, really, but 24K Magic is because of West Coast hip-hop: Dr. Dre, DJ Quik, Suga Free. This is what we grew up on. Listening to them, it was at a time when it was okay to party, to be flashy, to get on the dance floor,” Mars told Beats 1.

“That’s What I Like” has already become a hit. The song has been certified platinum by the RIAA, peaked at No. 4 on the Hot 100 and became Bruno’s first No. 1 on the Hot R&B Songs chart.

This Sunday (March 5) you catch Bruno performing at the 2017 iHeartRadio Awards. Then on March 28 he kicks off his “24K Magic World Tour” with Anderson Paak, ending on Nov. 11th.

Watch the visual below…

I can be your cup of tea or shot of Hennessy!
Related Items24K MagicAnderson ParkBruno MarsThat's What I Like
← Previous Story Lil Kim Wants No Parts of the Remy Ma & Nicki Minaj Beef
Next Story → Remy Ma Drops ‘Another One (Deceased)’ on Nicki Minaj (Diss Track)