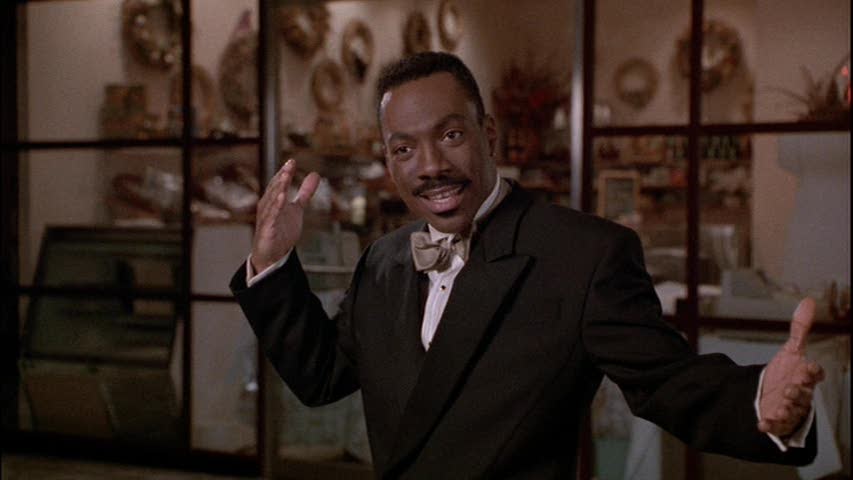 Recently I moved into a new place, and being in a new place without cable or Internet will force you to find different ways to entertain yourself.   Ruling out the options of playing cards or board games (do they still make them?), I simply reverted back to my childhood days when the cable might have been turned off (lol.)  I proceeded to thumb through my collection of DVD’s, only to stumble upon the Eddie Murphy flick Boomerang.   It happens to be one of my favorite films starring Murphy for the obvious reason; his debonair character Marcus Graham.  While watching I realized a few things:  One being: how at that time the film had features from legends like Eartha Kitt, Geoffrey Holder and Grace Jones.  Another how others from the ensemble cast went on to become huge Hollywood stars.  More importantly, the many lessons one can take away from the film that’s now twenty-five years old.  With the many cultural contributions, the film provided, there’s no doubt that the movie Boomerang was way before it’s time.

Workplace Romance:  I guess it’s safe to say that Marcus Graham has never heard the term “don’t sh*t where you eat.”  That or he decided to ignore it this time around.  Then again, Marcus was a dog, and dogs burry their bones in their own backyard.  In this case, his workplace was his backyard.  Business and pleasure has never mixed well!  That’s why many companies implement a no fraternizing policy.  It helps to keep the work environment pure, safe, and to avoid office drama.  It was surprising that a woman of Jacqueline’s (Robin Givens) stature would risk dismissal for insubordination.

Cultural Contribution #1: “First The Fat Boys breakup, now this” said by Boney T after he found out Marcus & Jacqueline had broken up.  His character was played by a then up and coming comedian Chris Rock.  Rapper Jay-Z later used the reference in his song “Aint No Love.”

Bros Before Hoes: Guy and Girl code has always been a thing.  It’s an unspoken rule between friends and acquaintances.  Well, Marcus being the dog he is took it upon himself to break the guy code by sleeping with Angela, (Halle Berry) the girl whom Marcus initially introduced to his friend Gerard (David Allen Grier.)  He didn’t just end it there.  He stuck the knife deeper in Gerard’s back when he and Angela became an item.  However, the guy code wasn’t the only code that was broken.  Angela played her part in it all.  Regardless if she and Jacqueline were really friends or not, she was well aware of Jacqueline’s relationship with Marcus.  It was just one big ole mess.  That unknowingly foursome is just another reason why workplace romancing should be off limits.

Racial Profiling: Allow me to remind you that this film debuted in 1992.  There’s a scene where the fellas were shopping in a suit shop, while the salesman followed them around quoting prices and informing them “we don’t have lay-a-way.”  That was just a blink in comparison to what’s going on today.  Twenty-five years later and a black man, or woman can still be easily followed when shopping in any store reminds us that racism is alive and well.  Sadly, the salesman continued on with his racist behavior by saying, “we don’t carry cash in the store.”

Black Boy & Girl Magic:  Before the phrases and hashtags #BlackBoyMagic and #BlackGirlMagic were even a thought or a coined phrase; it was a REAL THING!  In the film, you see these powerful characters holding down and running Fortune 500 companies like nobody’s business.  According to the film, Lady Elosie Cosmetics was a multi-million-dollar company.  Contrary to belief, black folks have been the backbones of many successful businesses.  It was nice to see that film have more than a sprinkle of black folks handling business.

Meet the Parents:  When we’re dating we rarely know when the right time to introduce our new potential boo to our folks is.  Gerard found out the hard way, but nevertheless gave us an important lesson.

Cure for a Love Hangover:  There really isn’t any cure for getting over a breakup, but we continue to think there is.  While cupid had his foot up Marcus’ a$$, we learned that sometimes the best way to feel better about your situation is to help someone in need.  Or take the attention off yourself.  Marcus admitted to not thinking about Jacqueline once while sitting in on Angela’s art class.  Needless to say, your breakup isn’t always about you.  It can be about others.  And if you don’t wish to do anything to brighten up the situation, then drown your sorrows in Sade.

Cultural Contribution #4 “Pussy whipped”- Before the film we hadn’t heard the word.  Now the word is a standard in the English language and dictionary.

DOWN on Love, DOWN on luck, DOWN:  The one that holds you up will also hold you down.  Marcus didn’t realize that he had a down a$$ chick on his side.  Angela was there when Jacqueline broke his heart.  Angela was there when he got suspended from work.  Angela was even responsible for his comeback.  Angela was his real ride or die.  The one who was always down for Marcus.  Too bad Marcus doubled backed for a of tap Jacqueline’s kitty kat, and damn near cost him his down chick.  However, it was Angela who had the last words with her unforgettable exit speech:

“ I might not be all glamorous, and I don’t have hair weaved all down my back.
But let me tell you one great thing about me, all right. I’ve got a heart.
And you know the bad thing about having a heart?
It gets broken when you deal with people like you, Marcus. Now stay the f**k  out of my life.”

In addition, I’ll be remiss if I didn’t mention the music.  The soundtrack for the film provided HITS!  The most memorable songs were…

There You Go- Johnny Gill

I’d Die Without You- P.M. Dawn

6 Life Lessons Erykah Badu Taught Us with Her Songs