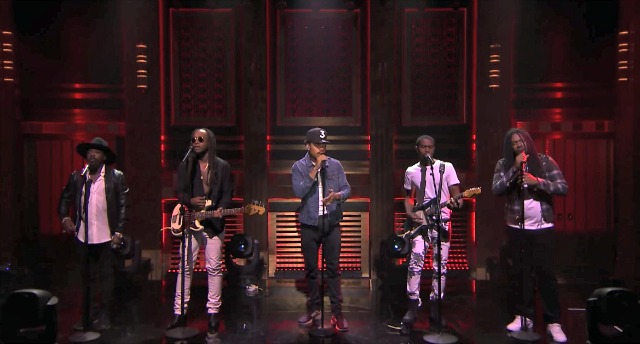 Last night (Monday October 3rd) Chance the Rapper stopped by The Tonight Show Starring Jimmy Fallon with a few friends to perform his mixtape’s closing track ‘Blessings’ (Reprise.) During his first visit in May when Coloring Book first dropped Chance the Rapper performed the original version of the song.  He’s back this time with the reprise version and special guest.

He bought along with him Ty Dolla $ign, Anthony Hamilton, Raury, and D.R.A.M. for a soulful rendition of the song. In addition to lending their vocals to the performance, Raury and Ty Dolla $ign both assisted on the bass guitar for the performance as well. Chance didn’t stop there either. In the studio audience there was a choir dressed in white robes participating in the performance too.

Chance is a hot commodity as of now.  He’ll be headlining The White House Christmas Tree Lighting concert this decemdber, in addition to his H&M campaign and writing the new Kit Kat jingle.  He’s currently on tour promoting his groundbreaking Coloring Book mixtape.