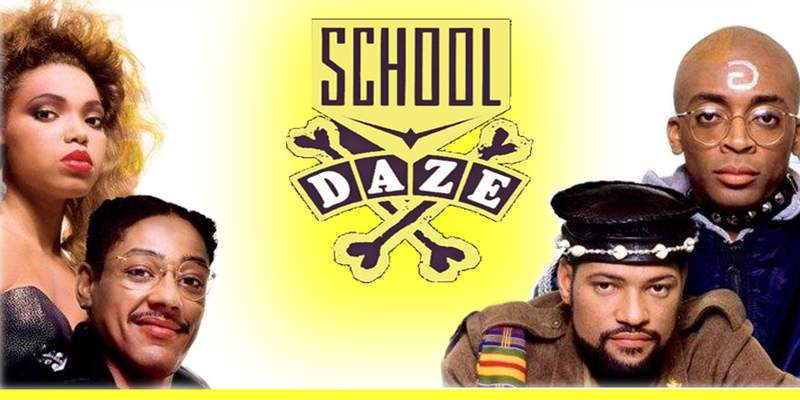 Thirty years ago, during Black History Month.  Spike Lee returned with his second joint School Daze.  Who knew exposing black college life on the big screen would be so impactful.

Daze was actually written before Lee’s She’s Gotta Have It, but budget prevented it from becoming his first release.  School Daze, which was originally titled It’s Homecoming was to be about Lee’s family legacy, who were educated at Historically Black Colleges/University’s.  His grandfather and father both went to Morehouse, and his mother and grandmother both attended Spelman.  However, the film re-directed its message to the many petty differences that cause blacks not to advance as a nation.  “I wanted to use black campuses as a microcosm of the black community as a whole.” Spike told Vibe Magazine.

School Daze, part musical is set at a fictional HBCU (Mission College.)  It pushed envelops, while displaying prejudices within race.  As the film explores how college life and home life have similarities; split into groups and cliques.  Lee spotlighted division, class, identity, self-discovery, and politics.  For the first time, we saw apartheid being addressed in entertainment.  “People are going to be upset, but hey, I’m sorry,” said Spike to the NY Times in 1986.  Although the film was received well, there were mixed reviews, and brash criticism from critics.  Daze ended up grossing $14.5 million to its $6 million cost to make.  The film is also responsible for birthing a few breakout stars in its process.  The film’s message didn’t completely fall on deaf ears, because HBCU’s enrollment increased by 23%, from 228,000 in 1987 to 280,000 in 1992.  School Daze was responsible for that with help from the television series A Different World.  Some of Lee’s cast later found a home at A Different World following the success of the film.

Thirty years later and class is still in session.  HBCU’s are still experiencing spikes in enrollment, but now, it’s due to the racial division in the country.  Still, many apply, but don’t attend because the lack of financial support the institutions receive.   Although the film was heavily centered around Greek life, the rearing of the film is still an issue today.  Thirty years later and we’re still discussing forward movement as a whole.  Thirty years later and we’re still separated by status, business, and identity.   There still hasn’t been a full self-realization of our [blacks] power together as a unit.   Spike’s message may haven’t cause the revolution he set out to make with School Daze.  But Spike Lee perseverance never stopped him from screaming WAKE UP at us!

1.Vanessa Williams was originally wanted for Jane Toussaint, but she had issues with the love scene, and Tisha Campbell was a stronger singer.

2. In the middle of production Morehouse, Spelman and Clark Atlanta asked Spike and his crew to leave.  Spike later finished filming at Morris Brown.

3. Spike admitted there is a script for a sequel.